The Another Man world has moved to AnOthermag.com. Click here to explore.
April 24, 2020

Jo-Ann Furniss meets the founder and creative director of Alyx, who she believes was always destined to be a significant designer

This article is taken from the Summer/Autumn 2020 issue of Another Man:

It is January in Paris, and I am sat with Matt Williams, founder and creative director of Alyx. It is a few days before his show is due to close the menswear week. In a matter of four seasons – although the label itself was established in 2015 – Williams’ show has become one of the hot tickets of the calendar. Its power has risen exponentially to reach ludicrous bun-fight proportions outside the next one, a few days later. Anyway, back to today, in the build up to the show. It’s that twitchy time when months of hard work have led to extensive sleep deprivation, slight hysteria and a sudden need to pin it all down and sum it all up in a few sentences. Talking to designers at this time is like poking them with a stick, a necessary yet really annoying stick. “What can I say?” says Williams. We are batting phrases backwards and forwards, playful, glib, useful, profound and personal – a bit like Williams’ label itself. He’s not such a serious character; we’ve known each other for about 11 years, through the good times and the bad, and he remains really lovely and something of a class act. He likes one particular phrase: “Glitter and despair! Glitter and despair!” He’s laughing, as he frequently does – it’s not just the pre-show hysteria. How else do you sum up a collection influenced by his grandmother’s love of diamante mixed with something of an apocalyptic worldview? Practical yet elegant, casual yet somehow formal, matter-of-factly-and-deeply responsible and sustainable without being annoyingly fucking earnest … The Alyx collection is all of that stuff that is needed for these very post-times. It is also extremely personal to Williams, probably far more personal than people realise when they first encounter one of those enigmatic signature buckles. In fact, in many ways, Alyx is a mirror of Matt Williams’ life.

Alyx for Another Man Summer/Autumn 2020

“Storytelling is what is interesting to me and to other people,” he says. “After doing so much behind the scenes and investing so much in the stories of other people, I wanted to do something hyper-personal. I wanted to do something with longevity that I could do day in and day out. Naming something after my daughter, that commitment felt necessary and personal. I did not just want to do a business; I wanted it to be what I do with my life now. I don’t think you can divide work from your life – this is my life.”

In some ways, Williams is something of an outsider who has come into the fashion industry and changed the rules somewhat. Those “stories of other people” were mainly about Lady Gaga and Kanye West, friends he was collaborating with as a creative director from an incredibly young age, about 21. He is still very close to Kanye, a friend he holds in the highest regard, and another outsider who has changed the rules of fashion.

“I worked in fashion before music and I never really wanted to work in music,” he explains. “It had not been a goal of mine, but I was happy to work in it. I just took what I had learned from fashion and applied it. Although I was still really out of place in that music mix – really, I always wanted to be a designer.”

Nevertheless, the worlds of music and entertainment, the particular, glittering edifice of performance, has given Alyx something of a showbiz sheen and it has been taken to the hearts of those communities. Just after the show, Michèle Lamy, that sibyl of Parisian fashion, declared: “The power and the energy of that audience, it is really something incredible!” Then, a few weeks after the menswear show where she was milling about backstage, Laura Dern collected her Oscar in an Alyx creation – not bad for a brand with a penchant for practicality and a post-apocalyptic bent.

Both real and unreal – it’s a very Alyx combination – a shimmering Floating World of reflective surfaces and how-to-survive utilitarianism is explored in the collection. “It is about the blended versions of reality we all live in – both the real and the unreal together,” says Williams. And what better way to express this Through the Looking Glass world that we all seem to live parallel lives in, than through a looking glass? This is the latest excursion of Alyx, into industrial design. Backstage at the show was a new beauty station, designed in collaboration with hairdresser Gary Gill. This station’s design will be open-source with standard parts that are easily available around the world. It’s a mirror world Matt Williams hopes all the industry will adopt.

The Summer/Autumn 2020 ‘High Art Pop Culture’ issue of Another Man is now on sale internationally. Head here to buy a copy. 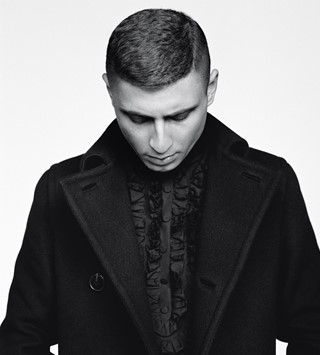